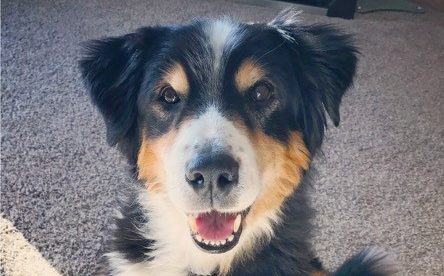 Lucy: The Once in a Lifetime Dog

26 AprLucy: The Once in a Lifetime Dog

Lucy was an once-in-a-lifetime dog.

She was adopted in 2012 at the age of 6 and right away she became the “Mayor” of the third floor at the Town Hall in Lake Placid where she went to work every day with her mom. She greeted the public as they entered the third floor and was always eager for a pet or a belly rub or just to say hi.

She survived cancer in November 2015—a mast cell tumor that was surgically removed. I was lucky that I found it. I was hugging her from behind with my hands in her armpits when I felt a mass. I instantly called my vet and we were seen the next day. She knew right away it was not good and scheduled surgery for a couple days later as she knew I would go crazy with worry if we waited any longer. She did the surgery, removed the mass and took plenty of surrounding tissue as well. The pathologist report came back Stage I. And said that with surgery it should be all gone and that if it did come back, it would be in the same spot. I was told to check the area every few weeks. Within a week she was back to her old self and we resumed our happy lives.

In November 2016—a mammary gland tumor was surgically removed. She had a tiny hard lump that I had been watching per my vet. I realized that it had grown a bit and we went in to get it checked. Again, she had a bad feeling. Surgery was scheduled for a couple days later and it was removed and sent out. Came back again malignant but that surgery was recommended as best option, which we had done. It didn’t appear it had moved to her lymph nodes, but I was told to check her every few weeks. Again, being the happy dog she was, within a week life picked right up again and she was back to her old self.

In November of 2017, I had just lost my cat to cancer and then Lucy started getting sick, looked like she had lost weight and was jaundiced. A trip to the vet confirmed our fears. She had a tumor in her liver. Again, we were going to do surgery but my vet first wanted to do a full body scan. With tears and her voice choking on the phone, my vet advised that the cancer had spread to her lungs and there was not much that could be done. She gave her two months.

When I brought her home I thought I was going to lose her then. But I started her on cbd oil and within a week she was like a new dog! She had lost 10 pounds, but now she was hungry again and keeping her food down. She played, she looked happy and she was her old self. She did great until the end of February. A week before she passed, she started retaining fluids and wouldn’t eat. We treated the edema but she still was not hungry. Then she stopped drinking water. She started vomiting and she was weak.

The last night she got sick in the middle of the night and her breathing became labored. I paged my vet and she said to come in first thing in the morning. We stayed up with her thinking she wouldn’t make it through the night. She looked in my eyes and I knew it was time. We took her in and while me and her dad held her and pet her and told her she was a good girl, she passed onto the Rainbow Bridge.

I will forever be grateful to my vet who gave us much more time with her after she survived the first two cancers.

Lucy was an incredible and amazing dog, a best friend and faithful companion. She and I were together 24/7. I miss her so much. And so do all those who came into contact with her. People come into my office every day asking after her and I have to break the news that she has passed on.