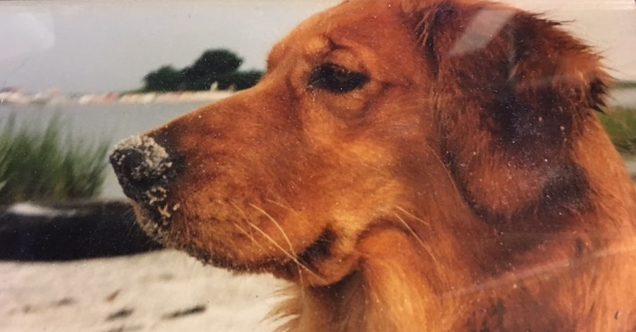 If you had ever told me I would do chemotherapy on my dog, I would have called you crazy.  That’s exactly what I did.

Maui was our first “child.” She was a beautiful dark golden retriever.  When we got the news that she was sick, we were devastated. We were referred to Dr. Gerry Post for a second opinion and treatment options.  He confirmed her Multiple Myeloma diagnosis and told us the best case, with treatment, would be eighteen months.

It only took the first time of Gerry not believing me that he should muzzle her before he tried to take blood for him to learn his lesson!!!  It also didn’t take long for Gerry and I to bond and for him to realize how connected I was with Maui.  That was a good thing because we ended up having a very long relationship.

Maui responded well to the treatment.  She made it past that eighteen-month mark.  It got to the point that Gerry would tell me to call when I thought something had changed.  I think he’s still surprised that I always knew!!  I would bring her in for bloodwork and he would adjust her medication as needed. She was living an amazing life, doing all the things she loved to do. He started to call her “Miracle.”

It was a normal day in April when the end came.  She was doing great and then she wasn’t.  She was down and struggling.  We put her in the car and I drove her to the emergency vet.  I was five months pregnant.  They carried her in for me and examined her.  All her records were there.  I didn’t want extreme tests.  Her body was shutting down.  We all knew it.  They were amazing.  I lay on the floor with her for a long time. I thanked her for all the love and joy she had brought us.  I forgave her for her aggressiveness and asked for her forgiveness for ways I had failed her.  I told her it was ok to go and that I would be with her through it all.  Then I was.  Then she did.

My beautiful Maui Dog was gone but not after 18 months, not after 2 years, not after 3 or 4.  That beautiful dog with Dr. Post’s help made it 5 years.  It wasn’t just 5 years, but 5 amazing years.  I’m so grateful I made the decision to do chemotherapy and for Gerry’s brilliance.  I will forever be thankful for the amazing work he does and the time we spent with “Miracle.”