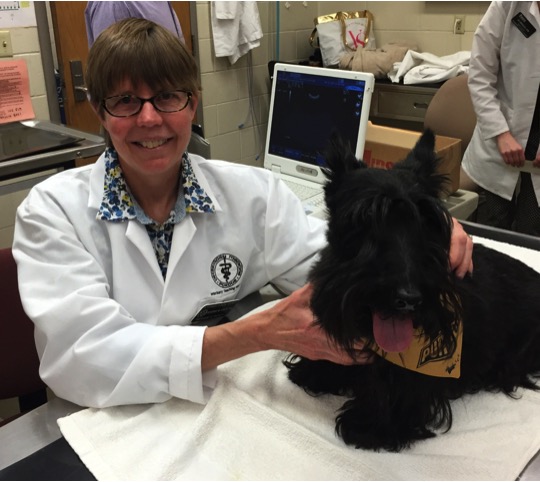 “Bladder cancer has not been a focus of human studies, but the ACF supported work in dogs is now providing justification to consider this approach for human bladder cancer as well as other human cancers” – Dr. Deborah Knapp

According to Purdue University’s Deborah W. Knapp, DVM, PhD, of Purdue University’s Comparative Oncology Program, approximately 2% of the 70 million dogs in the United States are diagnosed with bladder cancer.  Of these, most are diagnosed with invasive transitional cell carcinoma, a disease that can be very challenging to treat.  Knapp, an ACF Comparative Oncology Award recipient in 2013, has released early results of ACF funded research in folate-targeted therapy for the treatment of invasive urinary bladder cancer.  Dr. Knapp’s team worked with Drs. Phil Low of Purdue University’s Chemistry Department and Chris Leamon and colleagues of Endocyte, a precision medicine company, to evaluate the safety and antitumor effects of an anti-cancer drug which is attached to the vitamin, folate. They theorized that certain cancers in dogs and people could take up to 100 times more folate than normal cells in the body.  By attaching the cancer drug to folate, the researchers expected that more of the drug would be delivered inside the cancer cells enhancing the effect of treatment, while less of the drug would travel into normal cells, reducing side-effects, and extending and enhancing quality of life for those pets with the disease.

According to Dr. Knapp, “Invasive cancer therapy in dogs and humans is very similar, and some of the treatments that are successful in dogs are expected also to be successful in people.  Bladder cancer takes the lives of greater than 150,000 people worldwide each year.  Many patients fail initial therapy and there is a lack of second and third line treatment options for those patients.  The folate-targeted treatment approach controlled bladder cancer growth in most of the dogs that participated in the study and the treatment was generally well-tolerated.  The ACF supported work in dogs is now providing strong justification to consider this approach for human bladder cancer as well as other cancers.  Crossing cancer types, studies have been developed to test folate-targeted therapy in human patients with ovarian and lung cancer.”