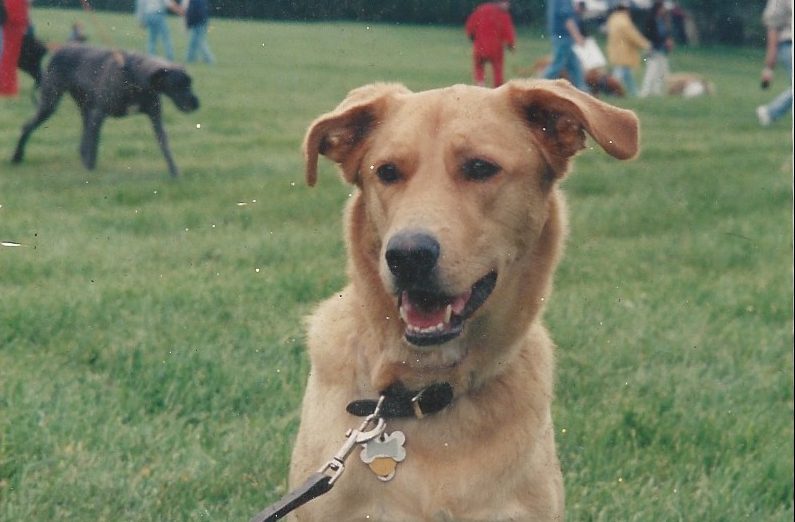 My dad wanted to be a veterinarian, but became an accountant instead.  As a result of his thwarted ambition, during my childhood we had many pets:  two birds, a border collie, a golden retriever, some hamsters.  We even babysat a guinea pig during school break once.  I think every pet owner will tell you that childhood pets are wonderful, but the first pet you have in adulthood is a special one.

Cassie, a yellow lab mix, found her way to me through a student who was volunteering in a local shelter.  My husband called her my “spirit” dog because we had a particularly deep bond.  She was smart, athletic and feisty.  We lived in an elevator building when she was young and she’d ride the elevator to the lobby to visit her friends, the doorman with the treats and the lady who owned the ground floor apartment.   She formed her own judgments about people, knew her own mind.  When our daughter arrived, Cassie appointed herself guardian, abandoning us to sleep by the crib and walking alertly next to the stroller.  She had attitude, that dog, best summed up by our favorite photo of her, the one that is captioned “Fetch It Yourself.”

When Cass was diagnosed with bladder cancer in 2008 at age 10 ½, we were shocked.  We had known that pet cancer incidence was high, particularly for Labrador and golden retrievers, but we had imagined she would live forever.  We quickly discovered that canine invasive transitional cell carcinoma (like its human equivalent) is mostly unresponsive to conventional chemotherapy.  We felt cheated of our time together.  Despite our best efforts, Cass was gone in three months.

Simultaneously to Cassie’s diagnosis, I was introduced to the work of Animal Cancer Foundation to support comparative oncology research, studying naturally occurring pet cancer as a model for cancer in people too.  The field of study was fairly new, since veterinary oncology itself had only become a specialty in the preceding two decades.  Veterinary oncology and comparative oncology research lacked the investment of funds that would produce results.  Cassie’s motto seemed particularly resonant.  If I wanted to see better treatment and eventual cure for pet and human cancer, to save dogs like Cassie and people like my friends and family, then I’d have to invest my time, talent and energy, alongside the board and supporters of Animal Cancer Foundation.  In no small part due to the investment of pet parents like me since then, Animal Cancer Foundation’s support for collaborative research studies, symposia and workshops, has allowed the promising field of comparative oncology to gain traction in the wider cancer research community.  Some better treatment options have emerged, but more work is needed, more funding to find the causes and cures to save lives.

This June with support from 12 universities and 3 charities including Animal Cancer Foundation, the National Academy of Sciences – Institute of Medicine held a two day workshop in Washington, DC open to the public to explore and develop the role of the canine oncology model in cancer research and drug development. Several directors of Animal Cancer Foundation attended and we are thrilled to know that the action plan to come out of that meeting will significantly advance comparative oncology.  Cass, we’re fetching it ourselves.