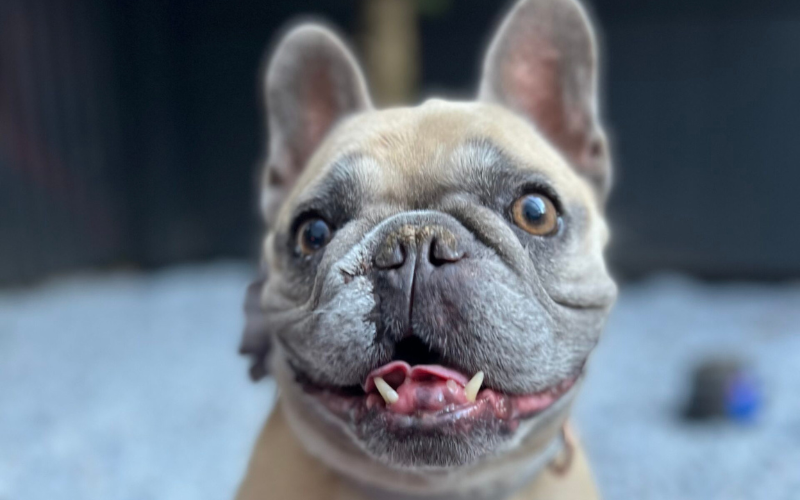 When last we checked in with Tully the French Bulldog in July 2021, she was about to undergo her final chemotherapy treatment for a Stage 3 mast cell cancer.  Throughout seven months of chemotherapy and related surgeries, Tully had hung tough, battling her cancer with the same focused aggression with which she takes on her vast variety of chew toys.  She’s a great example of journeying through and beyond cancer thanks to the positivity of her family and her health care team at Cornell University Veterinary Specialists (CUVS).

“Tully is doing great,” says her owner (read, mom) Saxon, thrilled to be celebrating the one-year cancer-free milestone with her beloved pooch. “It’s amazing. She’s living her best life; keeping up with her four year old little sister like she’s a puppy. Right now, she’s in what I would say is her “never been better” place.”

Of course, through it all, Tully had a remarkable support team, including Saxon, her husband, and their two children, as well as Tully’s “sister,” fellow Frenchie, Ivy. The family, along with the team at CUVS, helped to carry Tully through the toughest of times, ensuring that every dose of medicine was accompanied by an equal dose of love.

Having triumphed over cancer, Tully is back to doing all the things she loves, including tearing around the dog park near her home in Westchester County, N.Y., sunning herself in the garden, and battling over elk antlers with Ivy. You know, every day dog things. Normal—with just a little extra dash of Frenchie feistiness.

“She goes back to see her oncologist every six months,” say Saxon. “And they do blood work, urinalysis, and an ultrasound. And we’re just so thrilled that everything has come back clean. Her lifestyle in-between is the same as it’s ever been. She loves going for long walks, she’s eating the same stuff, and playing as much as ever. Once she got through everything, she was quickly right back to normal. If anything, she’s more athletic and livelier than before cancer. It’s just so wonderful to see her acting like a puppy again.”

Asked if she had any advice for pet owners going through the ordeal of a pet cancer diagnosis, Saxon suggests surrounding yourself with an informed and compassionate support team, as she did.

“Trust is so important in these situations, and when Tully had to have her surgery the surgeon called me and literally walked me through everything for a half an hour, detailing every step he was going to take. The key thing for me was being well informed, because if you go on the internet, you’ll find 100 different things you “should” be doing and that can just be so overwhelming and confusing.  And when you find out your dog has cancer, everybody has advice. Obviously, it’s well meaning, but it also can be overwhelming.”

Through its commitment to funding research and to bringing information about the hope of comparative oncology to the public, Animal Cancer Foundation is working to make significant progress in assuring that more pets can receive life-saving treatment and that people with cancer can reap the benefits of research discoveries that use comparative methods to reveal basic science about cancer.

Especially this month, during National Cancer Survivor Month, we hope you’ll consider donating to ACF so that we can help to write more happy endings to tales like Tully’s.