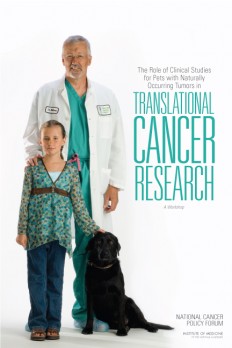 On June 8 and 9, 2015, Animal Cancer Foundation joined twelve academic institutions and two other charities in sponsoring a National Cancer Policy Forum workshop at the prestigious National Academy of Sciences, Institute of Medicine, “The Role of Clinical Studies for Pets with Naturally Occurring Tumors in Translational Cancer Research.”  The workshop was originally suggested to NCPF by Colorado State University’s Flint Animal Cancer Center, organized by Dr. Rod Paige of that institution and chaired by Dr. Michael B. Kastan, Duke Cancer Institute.  ACF board members Dr. Gerald Post and Ms. Annie Selkovits Taylor joined me in attending the two-day workshop.  Participants were invited to discuss topics that included:

The workshop featured panelists and speakers from a broad range of veterinary and human oncology institutions as well as advocacy groups working on the issues surrounding the effect of the disease on cancer patients, both people and the pets they love.  Animal Cancer Foundation Scientific Advisory Council members including Dr. Cheryl London of The Ohio State University, Dr. Douglass Thamm of Colorado State University, and Dr. David Vail of the University of Wisconsin were among the featured presenters, as was ACF Comparative Oncology Award winner for 2013, Dr. Deborah Knapp of Purdue University.

One of the major inititiaves arising from the workshop is a focus on building genomic content of the samples housed in the Pfizer Biospecimen Repository located on the NIH-NCI campus in Bethesda, Maryland.  The repository houses several thousand canine tumor samples that have been catalogued for use by researchers all over the world.  An emphasis was placed on further cataloguing those specimens to include genomic information that would enable both human and veterinary oncology researchers to use the samples to compare parallel cancer disease triggers and progressions in pets and people.  Establishing this connection would enable researchers to focus in on the most effective personalized treatment protocols for human and pet patients.  Animal Cancer Foundation’s goal for 2015 – 2016 is to contribute the funding to this worthwhile effort.